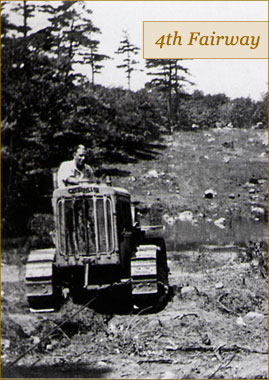 It’s funny how we New Englanders have always taken pride in making the best out of difficult situations. The Pilgrims were the first example of this spirit in 1620. General George Washington and his troops, facing seemingly insurmountable odds against the British in 1776, were another. And the amazing stories of American heroism during World War II make three.

The circumstances that set the stage for the creation of Happy Valley/Larry Gannon Golf Course were compelling as well, though maybe not as dramatic as the aforementioned moments in history. But for the people of Lynn, the golf project was a Godsend nonetheless.

The date was July 1, 1930. Bobby Jones had not yet completed his historic “Grand Slam.” The American population exceeded 123 million and it was less then a year since the Stock Market Crash of October 29, 1929. President Hoover, with unemployment soaring, appointed a Commission for Unemployment Relief. The Depression was making life miserable for millions, including thousands in Lynn.

Plans for a municipal golf course in the little-used Lynn woods Reservation had been in the talking stage for more than a year, long before the Stock Market Crash. With the onset of the Depression, the project had been labeled by some as “laughable and ridiculous.” How could the city be pondering the construction of a golf course and clubhouse when so many people in Lynn were suffering with less than the bare basics of life?

But others, like John Morrissey, saw the project as a blessing in disguise; a blessing that could prove critical to the survival of countless Lynn families. Morrissey, the superintendent of parks and playgrounds and one of the most popular members of the citizenry, had stirred up interest in a city-owned golf course with Albert Comstock, chairman of the Lynn park commission from 1918 to 1941.

“I knew that a public course would be successful,” Comstock told The Lynn Daily Evening Item in 1949. “The one I had engineered in Wilton, Connecticut, was an instantaneous hit. Some people, though, were completely against the project. Others said maybe a small, nine-hole course would be suitable. Still, my associates and I stuck to the idea (of eighteen holes).”

Joseph Cole and his supervisors in the Welfare Department had a solution for Comstock and Morrissey. Why not put hundreds of its men, suffering the indignity of placement on the welfare rolls, to work on the course and clubhouse construction? It was a brilliant idea that in the estimation of many ensured the expeditious completion of the project when it might otherwise have been delayed for years.

Thanks to a special act of the Massachusetts legislature, the men, 800 to start and another 700 by the time the construction was in high gear, were allowed the chance to work on the 100-acre project for their welfare checks. They were delighted. Their self-esteem was restored. Full-time Park Department employees also were involved on the course, which was designed by one of the game’s finest course architect’s of the time, Wayne Stiles. 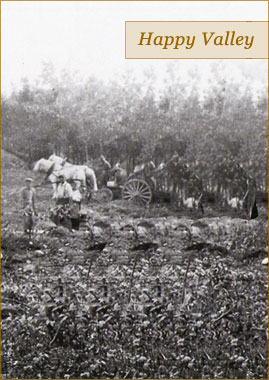 The Origin of “Happy Valley”

Long before the golf course was figment of the imaginations of Comstock and Morrissey, Park Department employee Nathan Hawkes referred in department report to a portion of Lynn Woods as “Happy Valley.”

The valley in question, according to Walton, was explained to golf writer Matt Rillovick in the July 12, 1981 edition of The Lynn Sunday Post.

“The only fairway which was fairly clear before construction was along the current 15th hold,” Walton said. “It was there that a number of small cottages served Lynn’s shoe industry. Factories downtown would deliver shoes to be stitched, then picked them up the next day. That area was known as “Happy Valley.”

During a public planning meeting for the golf course, Judge Ralph Reeves, according to Comstock, remembered Hawkes’ reference to Happy Valley. Those in attendance thought it was a great name. The course, however, was known initially as Lynn Woods Municipal Golf Links, with a secondary name of “Happy Valley.” By the time the course hosted the 1941 Massachusetts Public Links Championship, it was simply known as Happy Valley until it became Larry Gannon in 1975.

The First Constitution and By-Laws

The first Happy Valley Constitution and By-Laws were published in 1932. An original copy is available for perusal from Mike Foster. A few articles are worth highlighting: